ArcFM has a mature set of capabilities for representing water distribution networks with multiple pressure zones. And for many situations the out-of-the-box configuration that comes with the Schneiderville database will readily meet your needs. However, ArcFM was created as a configurable application for a reason — one of which is that all situations don’t conform to the standard.

This post discusses a case where you may want to take advantage of that configurability.

Below is a station with pumps, system valves and check valves, with pumps forming the boundary between the 40 PSI (Green) and 60 PSI (Blue) systems. At the right are the results of an ArcFM Pressure System trace initiated on the 40 PSI system – just as we would expect. Great!

Within the standard configuration devices that are considered pressure system boundaries are:

Say, however, you have pressure reducing valves defined as a subtype of your wControlValve feature class that act (in the field) as pressure system boundaries? The class has the VALVE subtype, but they’re not ‘closed’ and we don’t want them to be closed, because they’re not. They don’t stop flow of water but rather ‘regulate’ it to a set pressure safe for use in the lower pressure system. All this said when we perform an ArcFM Pressure System trace at a station with our pressure reducing valves we get unexpected (and undesired) results – as seen below.

After applying our configuration changes we can re-run the ArcFM Pressure System trace at our station with the PRV’s, and voilà, we get expected results. 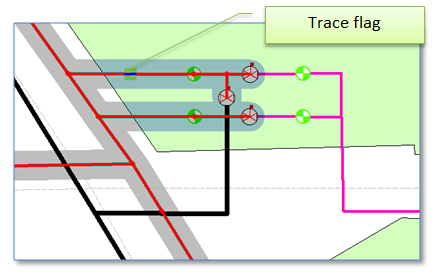 This post has described a specific case demonstrating the value and power of the configurability of the ArcFM solution. In this case we were able to alter configuration of a class containing control valves to act as barriers to a pressure system trace. One of the many capabilities and advantages of a configurable application like ArcFM.