This is the scenario.

Say your operations department has decided to perform a seasonal load transfer and serve a neighborhood from feeder Magenta102 instead of Green102. This involves moving the location of a tie point between the adjacent feeders. Our starting point situation is illustrated at the right with the tie point near the top of the illustration and upstream switch on Green102 at the bottom.

In practice what operations will do is temporarily close the tie switch and then open the upstream switch. In this way no customers will be without power at any point in the switching operation.

However, mimicking these steps in ArcFM will result in undesirable consequences.

The illustration at the below shows the results of opening the closed tie point as the first step and the opening the upstream switch as the second step. What’s happened is that all segments, and all devices connected to those segments were after the first step fed by both feeders. While after the second step the network as we want the problems with following the sequence are: 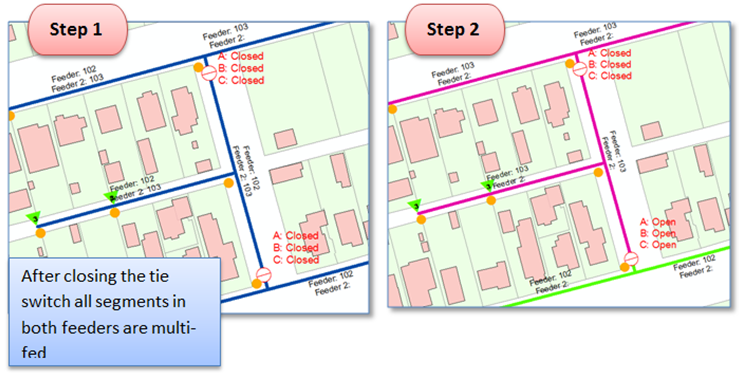 If these steps are reversed, so that the upstream switch is opened leaving equipment between the switches temporarily de-energized, we accomplish the same goal though this time the edit operation is much faster and there are fewer features edited and subject to possible reconcile conflicts.

Simple change in work steps, but de-energizing the sections to be changed can make a big difference in editing performance and in the long-term health of your Geodatabase.