It can be reasonably argued that the transformer is the thing that ultimately allowed Nicholas Tesla’s AC to win out over Thomas Edison ‘s DC in their War of Currents (and though we don’t normally provide literary reviews here, this is a really good book.) Within the transformer voltage is reduced (or increased) proportionally to the count of copper wire windings on the high and low sides of a magnetic core.

Which brings us to our GIS representation which in the ArcGIS model is a point with connected primary and secondary lines. You may be asking, how can a single point accurately represent a thing that has a high and a low side connection, right? We’ll get to that in a bit.

Traversing the electric network from primary to secondary (or secondary to primary) must proceed through the transformer. 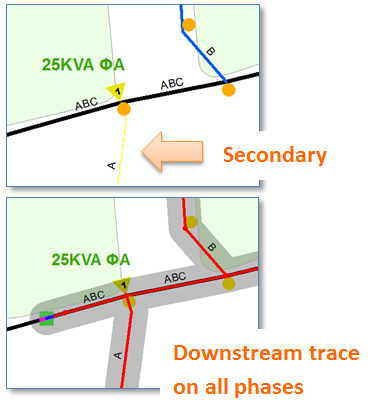 No big deal when both primary and secondary are 3 phase, or when both are single phase (and the same phase.) But in the common case where a single phase transformer is connected to a three phase primary we clearly need more information.

Say we’ve got a 3 phase primary with a single transformer connected to phase A providing single phase service to a downstream customer – as shown to the right.

If we’re tracing the network with the purpose of finding all connected customers regardless of phase, then again, no big deal. We trace from primary through the transformer down to the customer and we’re all good.

How does our GIS model know this? 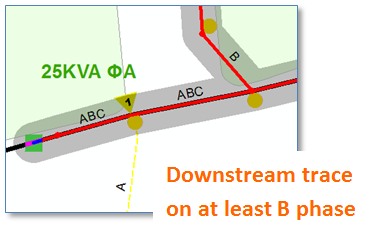 Well, you could say we would know based on the phase of the transformer – a trace on phase B should pass through a single phase transformer on phase A. However, this would cause the trace to stop at the transformer even for connected primaries – and that’s just not right.

How? ArcFM tracing learns about the high and low side of a transformer based on the Operating Voltage of connected conductors. That’s how.

The point is that ArcFM tracing is dependent not only on connectivity and phase designation, but also in the case of transformers, the primary and secondary voltage designations.