This post is the first in a series in which we’ll explore specifics of modeling utility infrastructure components within ArcGIS/ArcFM. To start we’ll address electric distribution conductors. There are two standard ArcGIS data models typically used within North America for electric distribution: the ArcGIS Electric Model and the ArcFM Multispeak model. While similar in many respects, the Multispeak model is closer to “ready-to-use-out-of-the-box,” so our discussion will begin there.

The following diagram illustrates the classes that describe electric circuit segments in the Multispeak model.  All features are sub-classed off of the ArcObjects ComplexEdge class. (Note that this can easily be changed to SimpleEdge if needed.)  Meta-data is defined in the ArcFMUserMetaData_ComplexEdge class and all properties common to all types of conductor, of which there are many, are defined in the ElectricLineSegment class. 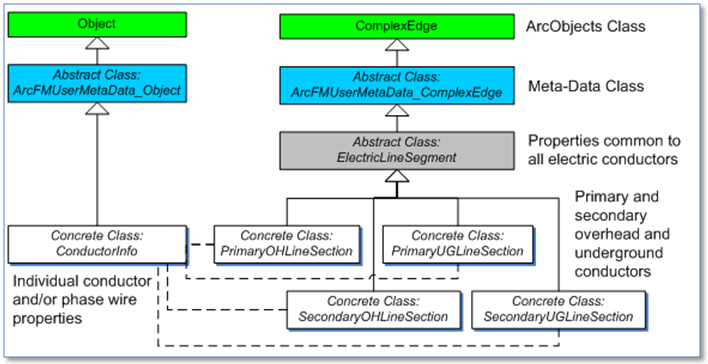 While the standard model defines all conductor classes sub-classed from ComplexEdge, an implementation may choose to exclude secondaries from the network altogether, in which these would be defined as the type SimpleFeature.  Reasons an implementation may choose to exclude secondary from the network include:

If secondaries are to be included in the network, another option to be considered by the implementer is to define these as simple edges rather than complex edges.  Unlike primary lines where there may be value in using complex edges to support connection of transformers without splitting the line, secondaries are typically connected to devices or to one another only at their end-points.

Circuit segments describe a span of conductor that includes all phase and neutral wires carrying electricity along the same circuit at the same voltage.  The model divides the set of all distribution circuit segments by voltage separating lines carrying primary voltage (over 600 volts) from secondary voltage (less than 600 volts), and further separating overhead lines from underground.

In implementation the company can determine what the extent of a “span” means.  Though this question does not strictly impact the data model, it is important to establish as a convention for the model’s implementation. Typically for overhead conductors this is either from pole to pole or from switchable device to switchable device. The choice often depends on how data is defined in the company’s legacy mapping and/or asset management systems as well as planned uses within the GIS.  Note that either approach can neb sued to achieve network connectivity and is fully supported by ArcFM and Feeder Manager.  Here are a few pros and cons for each approach:

This post has provided summary level information about modeling electric conductors in an ArcGIS/ArcFM solution Geodatabase. Clearly even within this “standard” model there are options from which you can choose to best support the needs of your implementation.